Our correspondent, Wilbur Schlager, has returned from the old world with correspondence and illustrations from the recent conflict in Bavaria.

Six weeks at sea has cured this correspondent of his travel bug, thirteen in total if you include the return in an unfavorable wind and so you will be reading of the campaign in Bavaria some two months since the last shot was fired and the forces of Napoleon Bonaparte were marching on Vienna. 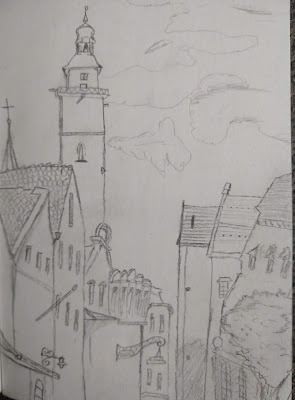 On my arrival and travels north I had to regularly try to gain intelligence on where the armies were mustering. For the French and allies I was told to make for Ingolstadt on the Danube. A journalist constantly runs the risk of being taken for a spy and my neutrality as an American citizen and enthusiasm for whichever side I was currently engaged with stood me in good stead. My Purchase of both a Bavarian and Austrian rosette from a reputable Dutch tailor was also a boon on close inspection although I feared discovery of 'the other' every time a soldier took a little too much interest in my possessions. 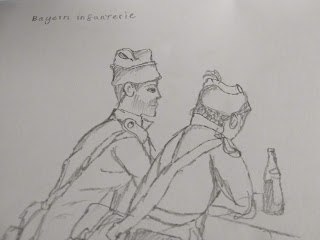 From Ingolstadt I followed the armies march towards Regensburg, to travel in the wake of an army is woeful. Food and wine will be in short supply, prices high, and abused citizens may be angry with strangers, again I played my sympathetic aüslander card. Even in the wake of their own troops suffering is not uncommon and the weather had been unseasonably bad making transport slow. 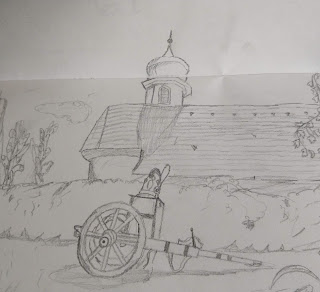 It was a Bavarian corp that I caught up with on the 20 April. I was off the road in flat country, scattered with woods and farms. The roads heavy with supply wagons and guns. It cost me half a bottle of rum to get a seat by a fire. They seemed confident, thinking the foe must be worse off than themselves, and Napoleon had arrived whom they seemed to have confidence in. 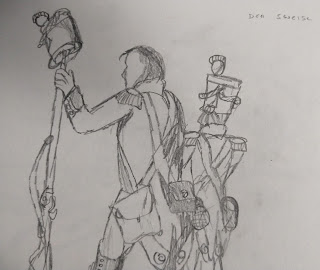 My experience of what I would later learn was the battle of Eggmühl was limitted to one small corner of the sprawling conflict. I fled from a small wood when I took a dislike to the number of cannons pointing my way and found myself on the lip of a rise with a column of Austrian Grenadiers marching forward, groups of grey clad jeagers in hunters hats flitted around them and engaged with their opposite number. 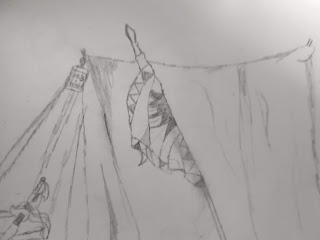 I believed the Austrians had the better of it from their initial advance and sounds of melee but the white coats were soon in retreat, cannon shot ringing after them.
I moved for comfort, I shall never forget the brute force of a cannon ball plunging through a light wood as if the trees were matchwood kindling, as if the devil himself, all enraged were crashing through the trees. 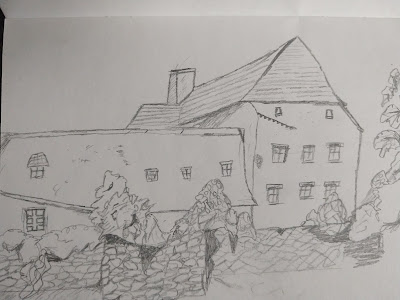 From my new perch I saw a Bavarian troop asail the wall around the Schloss Eggmühl, called a castle it's likeness is like that of a French châteaux, more mansion than stronghold yet a wall of stone yet made the assailents pay in blood before the ladders were raised and smoke indicated fighting beyond. 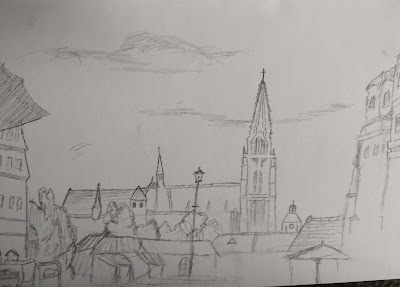 An officer of the 2nd Bayerische Chevaux-legere informed me that the battle was won, yet my ears told me blood was still being spilt and There on the flank battle was given next day. There is little love even in peace time between these neighbours.  I heard 6000 had fallen on the Franco-German side and twice as many of the Archdukes men. 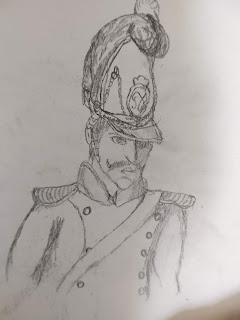 The sorrow of war is I would meet a Bavarian soldier and chat in ernest, then hours later be in conversation with a fine Austrian, and wish them both well, hoped they both would have good fortune yet both may end up a victim of the other. 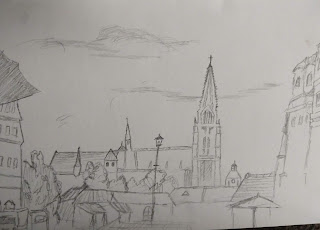 The army, for I found myself again with the same Bavarians, marched onwards to reach Regensburg and a seige, for that famous stone bridge has stood some six hundred years and defied both sides attempts at destroying it. Panic started in the army as I was on the outskirts of the small conurbation, much damaged, north of the Danube, Napoleon was dead!

But no fear, he soon made a supreme effort to show it was but a wound to his foot. Lannes, frustrated by failure, now snatched up a ladder and retorted 'I was a grenadier before I was a Marshal, see how a wall is carried!' His example inspired the men to another assault that carried the day.

I did not go into the smouldering town, but lodged one night with the baggage and headed east along the river and enjoyed the growing prosperity as I voyaged south and so to the sea, away from the war. It is America's blessing that war has not laid our towns and villages to waste in our generation and long may peace reign.