Was this the end of days? I wondered on Thursday morning as the rain drummed off the roof for hours and thunder and lightning rent the sky? or was it because I had planned to go camping out in a field the next day?

Spetchley is one of those country estate events that are 'tricky' to get to if you don't have your own wheels, like Ickworth it may actually exist in a slightly different dimension to our own, fortunately John Flapjaques offerred me a lift most of the way and I decided I'd go along, I had not yet done a multi-period event, unless you include three Germans and a dog at Dover. Which I don't. 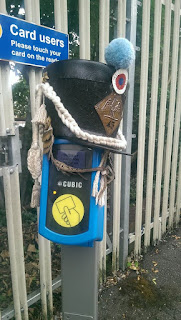 Five hours, 181 miles and a ghastly motorway services stop later we arrived just before dark and got unloaded, said hello to people, and went for a drink. There were two 'beer tents'.. one selling 'Dwarven Ales' and 'The 1940s pub'.. the latter is a small building that literally gets put on the back of a lorry and driven round to different events with all profits going to charity.. the former had such beers as 'Grunhild', 'Frost Hammer' and 'King Korvacs saga'.
On the way back I got talking to a young man who'd been around the camp (anyone younger than me counts as a young man) and he was one of our new recruits, Darren, and we chatted about events we'd done and stuff he'd need and his own experience doing English civil war stuff. 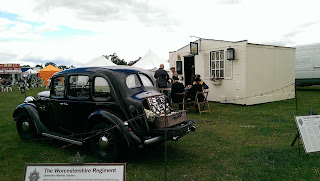 It was a mild night, even a bit humid, so I just put my great coat on and settled down to sleep, sadly there were no sign of any meteor showers, which was a shame as such tend to be portents of British doom. 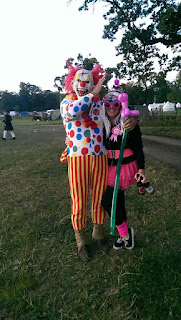 Next moring I wandered about and chatted to some Confederates cooking breakfast and an ancient Greek pirate Captain, some Americans played a gramophone whilst further off came bugle calls and drums. Tins of spam were opened whilst others ate porridge. This was a good part of my first multi-period event, the mish mash of styles and the way people cook/eat/sleep/dress. The slightly disconcerting feeling of seeing someone you know as a British rifleman dressed as a confederate, but.. who.. eh.. that's not your hat! 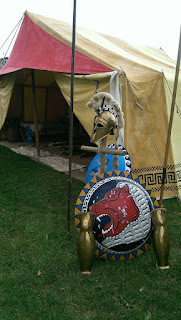 I had tested my flint was sparking well but it was hard to see in the sunlight, it didn't seem to be, even with a new flint so I went away and fired off a test shot, which worked, but when I drew the hammer back afterwards it failed to click into place, just slid into half cock. I couldn't really take poor Henriette on the field if she wasn't feeling well. Apparently a spring had gone but it could be fixed in only a little time, Derbyshire arms were on site with the traders but a musket was kindly leant to me by Garth and I was putting a new flint in as I rushed back to form up for battle. 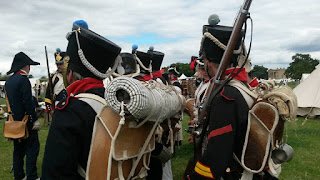 We marched on to the right flank by the regimental gun, and waited for the British to show up. Skirmishers and a unit of redcoats advanced towards us and the order came to fire. PFFFFF! Flash in the pan. I cleared the pan and shook out the powder to reload from scratch but realised that as it had been the first rammed down shot the wadding from the first shot may have prevented the powder from coming out. I would have had no worries with Henriette and fired away but this was a strange gun and I didn't trust it or know how well it would take a double shot (if that is what it was, it would probably have been less) and I wouldn't have worried if it was just me but I was closely surrounded by my friends and comrades and it was better to be safe than sorry. I just went through the motions of loading and firing henceforth.

something happened then that I'm still not sure about, at the exact moment I looked up at a cannon it was engulfed in a sudden flare of red tinted light and the crew went down. I thought there had been an accident, but the crew lay like they were playing dead and no one seemed to have noticed or were giving signals for aid. I took a sigh of relief and concluded a pyro had gone off in front of the gun and it was just the angle I was at that made it appear that it had been on the cannon itself.
Sadly there was an accident with a gun that day and one of the crew was taken to hospital but I still am not sure if that is what I saw.

It was to be a French victory and the British began to fall, we took a lot of vollies and I began to feel we should be having more men down and thought of falling in the next exchange but no one had mentioned casualties (that I heard) and before I knew it we were standing over the remains of the British and their German allies. I felt a bit bad for not being shot.

I took my musket over to have it looked at by Derbyshire arms and lo and behold it was perfectly alright now, clicking into place, the chap (Gary) even took the lock off and had a poke about but said everything was fine.. maybe moisture in the air or something coming loose when I fired had stopped it latching but everything looked sound. Oh well. 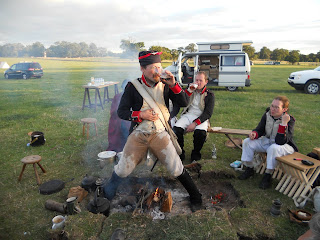 Pint of porter > Trousers accident. Drying over the fire.

Most nights people end up round the fire but that night was a particularly good one, joined by the Sappeurs and miners, and we had our own Eric who is a wealth of songs. Many people suggested or contributed a song, I even did an imprompu rendition (I put the rend into rendition) of 'Wooden leg', complete with a wooden leg prop.
As a few people started to drift off I felt the need for sleep myself and must have been tired as I soon got to sleep only about five metres from where the sing along was still going on. 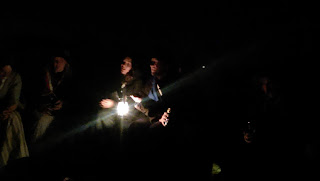 A special mention must go to 'The ragged Victorians'. A collection of Dickensian characters who were out and about amongst the general public and never drop the act, a rag and bone man, boy chimney sweep, a navie/ruffian, Fish seller, a bawdy prostitute whom literally bumped into me a couple of times and her younger colleague who I suspect had consumption.. and a couple of Peelers to try and keep them in order, and usually failing.  There was also a solitary six foot Elizabethan pirate who spent most of Sunday 'being drunk' and calling people out and hurling colourful abuse. 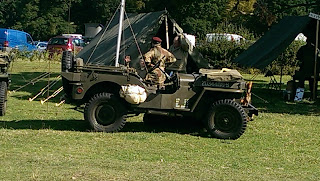 Everything was about an hour earlier next day and we marched on facing down the field this time. Several vollies were exchanged and the Brunswick cavalry attacked us but we rallied together and they later attacked the Sappeurs when we were falling back.. the Sappers always attract cavalry attacks!  When our own few horsemen attacked the British ahead, wheeling and hacking, a Sergeant of the 85eme had to shout at them..  'Oi! can you clear off now, your holding the battle up!' 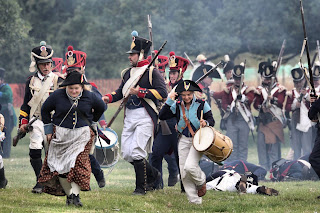 I died once besides my comrades but was dragged up by the Corporal 'It's not your time yet!'. My cigarillo box must have saved me again but it was only a short reprieve before a bullet sent me spinning backwards.

After the battle it was time for a cold drink, I found it hard to believe the weekend was almost over. Having been at Waterloo for six days doing a two day event seemed so brief, I hard only just settled in. The weather had been great, dry, sunny, but not too hot.
I bought a pie for the voyage home and chatted to a very pro-French visitor who said he'd look up the 45eme as he was thinking of joining a group, it was us or American Civil war.  I must say there were a couple of groups I chatted to and thought 'Hmmm, I could give that a go...'
There was a grand parade at the end with all the groups attending forming up into a prossesion and marching around the field, cheering each other, Then it was time to pack up and say our goodbyes, until Painshill... 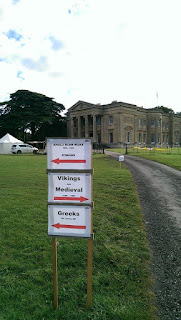 Posted by Rhandolph at 05:24 No comments: