Lewes is probably the nearest place to me that has a semi-regular reenactment event, but I've never managed to get along and indeed in 2019 I was set to be in Almelo, Holland, but my appendix intervened and blew up. Can't be doing anything taxing as it heals up. A foray to Lewes as a non combatant however would be a welcome change of scene for the day. On Lewes bridge with the mayor (obscurred by large armoured men), that is Simon De Montfort in foreground with the dastardly king, his foe, to his right. The appearance at the castle and here was to advertise the event and the Sunday battle. 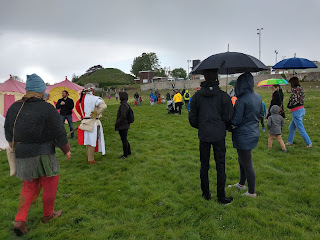 Back at the convent field the weather turned, I prayed for intervention and said the sun would come out for the battle, no one would have to die in the rain, and I'm sure it worked.

Is the general public response, understanbly enough to my new guise which I got a couple of years ago but not had an appropriate outing for it, however I am not a monk.. making the reenactor in me want to put them right.. well it's a conversation opener!
A monk removes himself from the world to contemplation in a monastery. A friar is the opposite, out in the world, hands on, helping the needy and spreading the word. 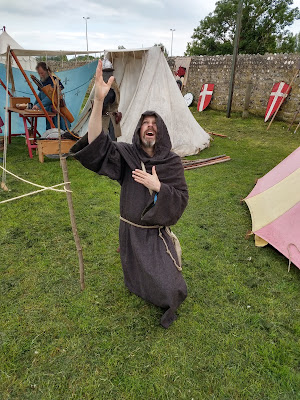 Saint Francis, founder of my order, had been wealthy as a youth and briefly a soldier in Italy but repented of his worldly ways. As a non religious person I would come at this role by remembering my admiration for this, friars and Fransicans especially are my idea for how Christians should be, not wealthy and preaching from comfort but living by example, One fellow asking me questions announced that he was a catholic and for a moment I thought he might take umbrage at someone depicting a religious figure, but he didn't and I feel as long as I respect the role no one really should. 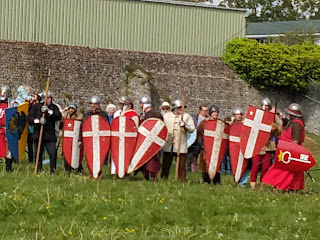 I didn't take to the field given my convalescent state but watched the crowd line and let down the rope when the troops went on and off. It was a modest affair with more folk expected the next day. There was one participant pf note whom seemed to have come to a medieval battle as a 1970s Biker, but with a sword and shield!   Ive never really seen anyone who looked a bit.. lost? No one had said anything, maybe they didn't have the heart?  How do you even do that if you are the organiser at a small event?  Mate, this is the battle of Lewes, 1264, not Easy rider, 1964. 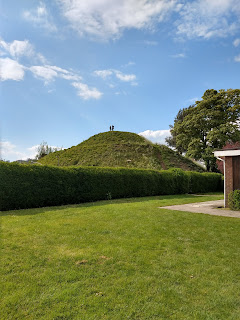 The mysterious mound near the convent field is actually.. , no one knows, maybe something to do with Druids. especially if you know Lewes.

It's a pleasant local event and I believe they will try and make it a semi regular feature, events often grow when groups get used to set dates to put in the calendar. I loitered for a bit with the Free company, some of whom also appear in these adventures as the Napoleonic sappeurs, and then wondered like a pilgrim to the train station all of two minutes up the road. 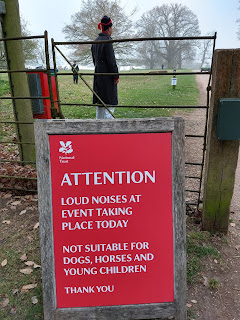 My third Ickworth, always a good kick off for the season and always cold or wet or cold and wet, or wet and cold.
l did have a slight sense of trepidation though. Last year was without any of these Napoleonic association camp behind a country house/battle in the afternoon/socialise around fire in evening events and I wondered if I would still enjoy myself as much, last year having been heavy on campaign and foreign events. 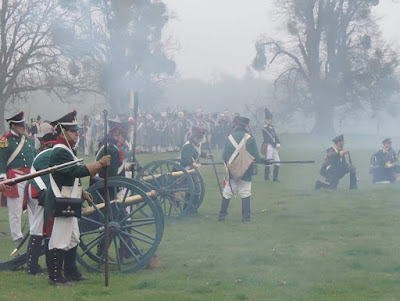 What wasn't typical was splitting the armies in two as their was a test for a future campaign event on the site and the NA wanted to see how the space worked and try some objectives out. It would also be a good taster for those unfamiliar with this sort of running skirmish and treks. The sides were all the riflemen Vs 16 French volunteers, of whom I was naturally one.

One of the NCOs observed that the group seemed to have forgotten that troops do actually form units and fight/march in formations when not actually skirmishing My own view was that this was new to quite a few and the novelty of ducking and weaving and firing round trees had overtaken them, it was a different format to standing shoulder to shoulder and listening to orders and it was fun, plus the hotch potch group had lost its recognised command structures, bar the overall officer, which may have added to the impression. 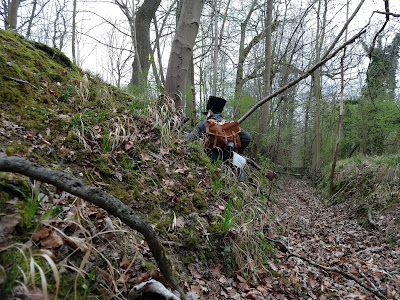 It certainly didn't hinder effectiveness or elan and I think the French spirit worked particularly well in firing the troops up. The Rifles enjoyed the event and admitted they found it galling to cope with us playing them at their own game. Their attempt to outflank us making us pivot around firing from different directions, the hunters had become the hunted! 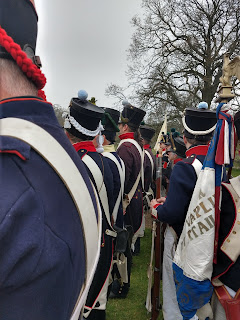 Before I'd even fired a shot I went to show a family how a musket worked, including how when you pull the trigger the flint hits the frizzen and sends sparks down into the powder.. Gchink! The end of the flint just chipped away. This would be the way of it all weekend, I got through seven flints in two days, must have been a very brittle batch. Someone somewhere must dig up masses of flint just for reenactors. 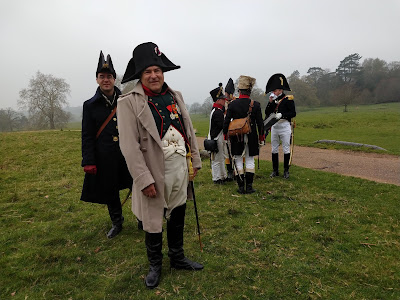 The battle on Sunday started well with the bagpiper being surprised and shot, if only this could happen sooner,  Friday afternoon for instance or before they leave the house.
Our plucky vanguard of Sappeurs was soon overcome by a cavalry charge, something they have a dramatic talent for.
Then we, the main army, marched on from the flank having all filed over a wall, shhhh! Down the far corner and hopefully surprising the audience although quite a few of the British have probably seen this ruse at Ickworth before it does work well.It was a lively engagement with two wings fighting it off and the smoke hanging in the damp air. 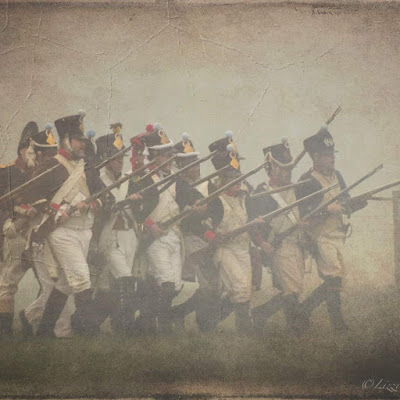 But the day was not ours, apparently decided at the officers meeting by a coin toss!  The vengeful redcoats decided to shoot our medical infirmiere but he legged it to much applause. 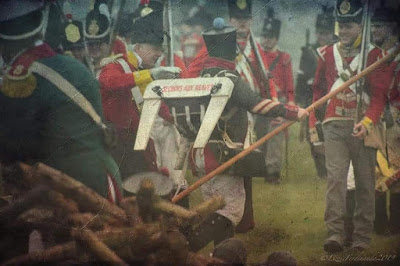 A good weekend all round.

Posted by Rhandolph at 05:11 No comments: