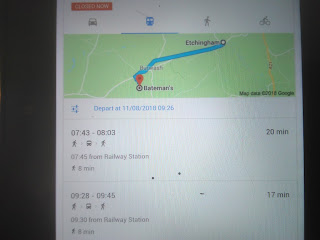 Evidence that I was right! My planned weekend at Bateman's started with a bit of a trek, first to Brighton station as there were no trains stopping at outlying stations due to Pride.. and then to arrive at Etchingham station two hours later to find.. not a living soul. I managed to find the bus stop, but it clearly showed no buses at weekends. Buses were a thing of local myth and legend! so it was a march to Burwash and down to Bateman's, once the home of Rudyard Kipling. I was given directions to go part of the way by a backroad by two locals with their own speed camera.. I hoped I wasn't entering Hot Fuzz country and would never be found...

I did arrive though, literally as the battle was about to begin and had to hurry into tunic, helmet and belts and ran up to the hillside with everyone mostly concealed '''Excuse me, which side are the Germans?' I had to ask.

Minutes later I was on the treeline, ducking to avoid bullets and looking for any wounded. No sooner did I reach some as the British charge came home, someone shouted about 'Bayonetting the buggers!' and I drew my Luger. There was a very real moment of cod-German me exclaiming I was only loosely waving my gun at them in defense and them all aiming there rifles and shouting, but I was disarmed and taken alive.
Thus ended my first Great war battle, without doubt the shortest one I'd ever been in. 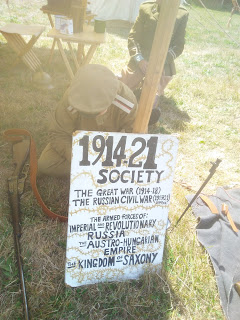 The rest of the day was living history, talks, displays, an amusing twice a day skit from the plane crew. Talking to the public, eating cheese and drinking cloudy lemonade. I joined some of the group for a stroll up to the 'Rose and Crown' in the evening, which did very good fishcakes. 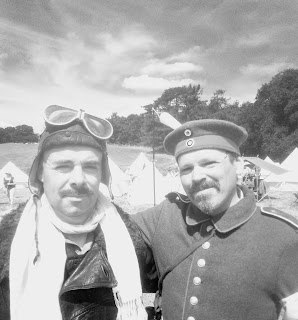 Battle on day two was again the start of the event at 11 am, which is unusual as most of the public are drawn to the afternoon. More firers were needed so I stripped off my red cross and accepted a blank firing Moisin Nagant pistol from the Russians. I was forward sentry and also had to spot the red flag meaning 'Action!'. Amid the echo of rifle fire I cracked off a few shots and ran back only to be spun around by a bullet with my name on it. I ended up kicking myself on day two as someone had been selling old kit on Saturday and had medical pouches but wary of spending my limited amount of cash I had said 'probably tomorrow..' now it was tomorrow and I had the cash left but the chap was not here! 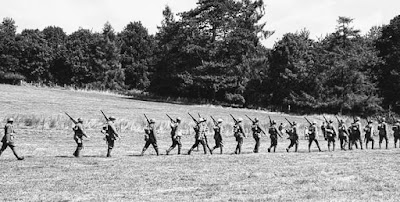 I picked up quite a few tips from other German reenactors, like how to buff my helmet to make it look less new, that my buttons should be dyed/painted if after the very, very early war, and where equipment like bread bag and canteen sit.. pretty much at the back which seems awkward and counter intuitive but apparently if you needed something you'd ask a comrade to get it. Some advice though was seemingly contradictory.. your boots should really be a darker hue with this exact dye watered down to 1/3 strength.. and then that the German army had little standardisation after the blockade and material shortages started to kick in. Personally I shall stick to a few abnormalities under this very guise. My mother sent me these boots don't you know!

To close the day there would be a parade and commemoration. I joined on to the 73 German fusilier regiment and marched out, swinging right arm in time and trying to catch what the unfamiliar commands were.
The main regiment were British and to mark 1918 as the wars end at a given signal two ranks of them laid down their arms, stripped off jackets and helmets and put on civilian caps. Return to civilian life, those who survived. 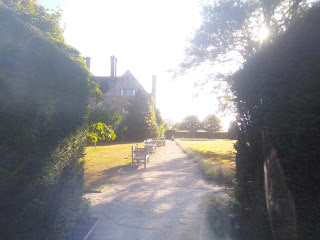 The march off was interesting for me as having tagged myself on the back to follow the others I was now at the front and couldn't see anyone. Fortunately with a bit of panache and knowing my links from my Rechts I made it back to our flag for a unit pep talk in what a grim future awaited us. 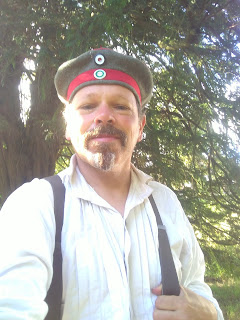 The voyage home was a lot smoother, and pleasant to imagine that I could actually be going home on leave on a train, which I was glad of as I was sure I could feel the hobnails through the bottom of my boots by now.
Next stop will be.. not sure actually, quite a quiet August will be followed by quite a busy September..

Posted by Rhandolph at 10:46 No comments: