It was only a few days before Basing house that a change of plans made most of the weekend free so I could attend. It was a modest event and not many of our group were going but really that should be MORE reason to go. I also try to live by the idea of 'If in doubt, go!' In a YOLO sort of way, although that phrase had always confused me when I think about it.

If you only live once shouldn't you actually be really careful? 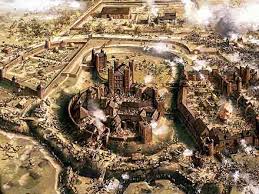 Basing house was once a magnificent complex of courtly buildings that started as a Roman site, then Norman, and reached  a it's height of splendour during the Tudor period but was beseiged and raised to the ground in the Civil war. There is a civil war reenactment of this most years but this weekend was Jane Austen weekend to mark 200 years since her death, with dance classes, book stalls, and some regency era soldiers of course, and two donkeys. 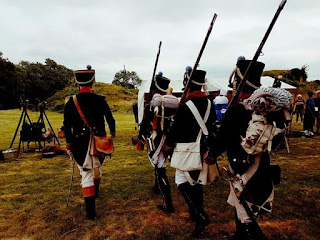 One of the great things about smaller events is you get to meet everyone you are working with.. some of the people there I have probably been at a dozen events with but if they are in the British camp with two hundred others and you won't know them from Tommy Atkins, but two days in the same tentline and a social evening and you'll know them well enough to say hello and catch up at other events. 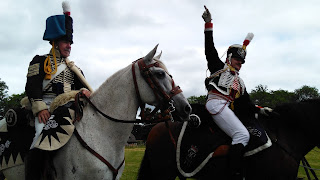 After an inundation of breakfast offers on Sunday I went for a stroll, more people turned up, public and a couple more troops. Investigated the giant Lego model of Basing house in its prime.
Some of us then walked along the river to spread the word, it would have been rude to address the punters in the pub garden without having a drink of course. Hopefully a few decided to drop in post Sunday lunch. 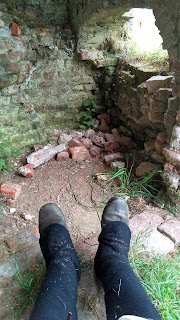 We pushed on Sunday for a skirmish instead of another display and drummed up five French (two usually Brits but one had a French voltigeurs kit for the odd outing).. and an armed prison escape was on. Richard (who was to change sides) came into the obscure ruins to bring our soup and was overpowered and shot (out of sight) we then spread out around the enteance and bridge and opened fire on the surprised British in camp. Drums announced a patrol of Footguards would soon be joining us.

A couple of redcoats were down but numbers would soon tell. Despite a new flint I started to get misfires although you knew when they went off, big cartridges!  Quite by surprise the two British cavalry charged into the fray and I abandoned my musket to draw my sabre on them, seldom in life do you get to cross swords with men swirling around you on big horses.. and aaah, I went down.
It was a good scenario for the numbers we had and a nice bit of variety from the usual more formal battles.
Someone asked me if I wasn't worried about having two big horses swirling round me, sometimes horse can make you uneasy if they are skittish and you are not sure if they might try and pass straight through the spot you are standing on.. but you feel a certain confidence when you know both the riders and steeds know what they are about. In the UK most cavalry have their own horses but occasionally, and more so on the continent, people just hire a horse for an event and naturally it is dismayed to find itself in a field full of musketry, smoke and cannons. I think all the accidents I've seen have been at bigger continental events.

All in all a pleasant little event, possibly bigger next time if the organisers were happy although as mentioned weather and advertising didn't do it any favours. Bit of an odd event next, a music festival with just us adding a bit of colour, and doing a bit of crowd control and odd jobs! see you soon! 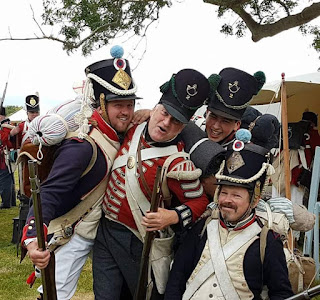 Posted by Rhandolph at 12:17 No comments:

Truely I am falling into the reenactment calender, some events you want to do every year.. and July means getting on the coach for Bretten in Baden-Wurtemburg! sixteen hours across France, Belgium, Luxemburg.. where they have white chocolate and strawberry magnums... and into Germany for the Peter und Paul festival. 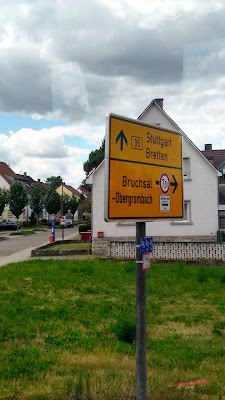 Group shopping trip, coach unpacked, camp and bar set up and it's time for a wander into town for a beer and an ice cream, my own new tradition, and learnt that Kubel is German for 'dollop' of ice cream.  "Ein eis mit Zwei kubel, ein Walnuss, und ein Malaga.' ends any confusion, although I still get ice cream on my hat. 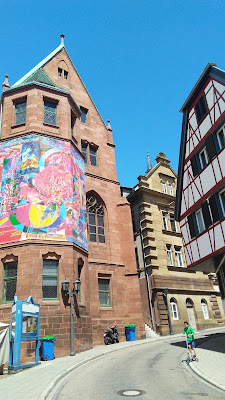 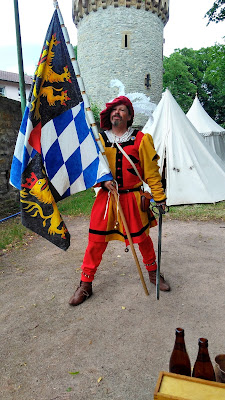 We were required on day one to all kneel before the Hauptman and the flag and take a solemn oath:
'Do you all swear to serve the Bretten council and have a bloody good time doing it!?'
'YES." 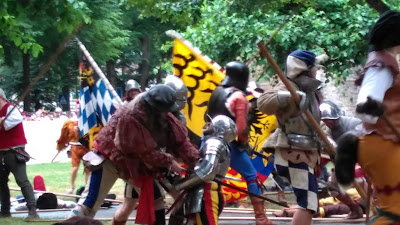 The battles are a number of small encounters loosely telling the story of 1504 but no one would say the reenactment is a major part of the festivities just one of many draws on the menu. There is a lot going on and a lot of 1504 life of the craftsmen and guilds of the time, be they carpenters, radish farmers or even a few lepers, and a lot of flag twirling and drumming. 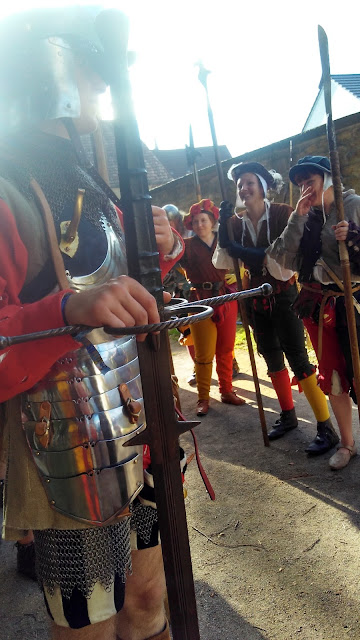 Whilst hardly a campaign weekend Bretten is to some extent an immersive experience, most of the town is so transformed that you really can be in the mindset of being a landskneckt for the weekend, its a life of swaggering about being armed in fancy togs, possibly half covered in bells to give notice and mark you out from the townsfolk, and eating and drinking and fighting. That evening at the Bretten camp/tavern there is a ceremony where those bringing large pieces of wood or bread up to a dignitary can be rewarded with a helmet full of beer and I managed to insinuate myself into being honourary helmet holder, I didn't think the offerings that great this year, no one struggled up with a tree truck, although it did mean there was enough for a free beer for me. We landskneckts don't do stuff for nothing you know!

This immersion was also why I insisted on keeping my Katzbalger (side sword) on at all times, it is a status symbol of our profession. 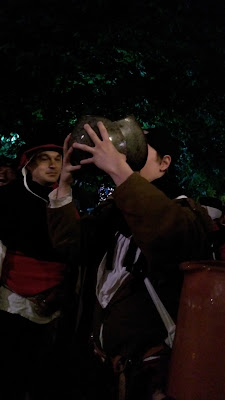 Not being on duty Saturday was largely a day of pottering about, and shopping, I bought a nice leather pouch to replace the linen money bag I had to keep wrestling with, and sometimes losing, and of course MORE BELLS, three separate ones and a string of them for my other leg, and a fridge magnet. Random act of German kindness this weekend was walking up for what Id taken to be a small bar and asking for a beer only to discover, drink being handed over, that it was just someone's tent. 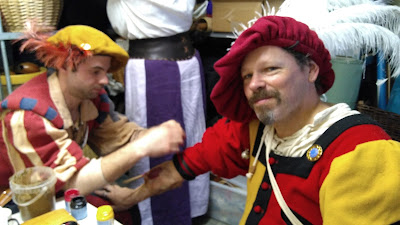 Volunteered again for being amongst the Surgeon's cases, this years padding being chicken instead of raw pork, although still bound in ham.  Doing this means fighting in the first attack before being cruelly struck down.. and staggering into the arms of a helpful frau and ushered to the surgical station and doing lots of screaming. I don't mind missing most of the fighting as I still find it a strange mix of polite 'to me, to you, to me!' paddling and a minority of people who actually want to win like someone actually cares. Most of my comments from 'Mush' about willing co-operation still stand except you do have a limited degree of autonomy on whether you get killed early or late.. or not at all if it is your day.. because being stabbed requires a quite dramatic response whilst no one really knows where a musket ball has gone.
(incidentally my renaissance EU brooch proved popular and I may have to make half a dozen for folk if I can find a good source of brooches). 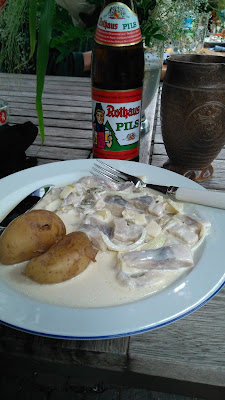 Still on the subject of food and drink one of my favourite moments of the weekend was being one of our group invited to the Herring and potatoes breakfast. This is actually all homemade and in the courtyard of someone's house which makes it even more intimate and whilst I had my doubts about cold fish and beer for breakfast when I woke up it all proved superb and I may have to put herring on the shopping list. 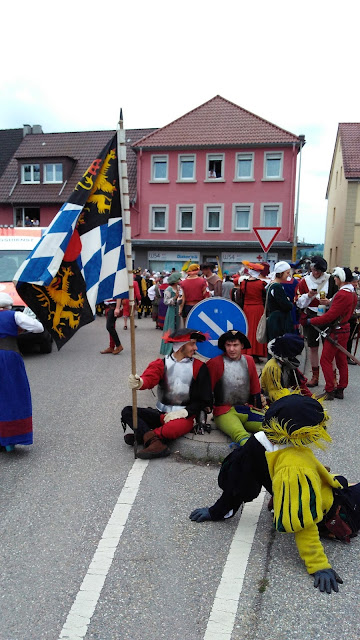 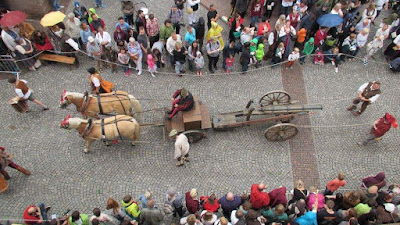 A gun with a history, when the festival was (re)started back in the 50's there was an abandoned WWII 88mm anti-aircraft gun that they cannibalised to make the barrel of this cannon. 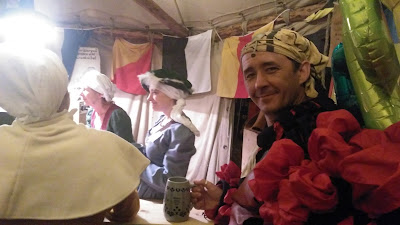 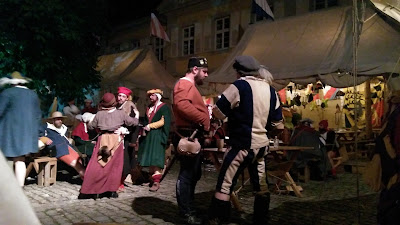 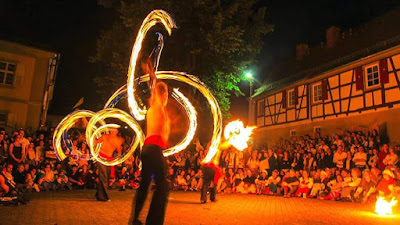 As well as acrobats there were several bands on, a few modern ones over in the Markt platz and some authentic ones by the Church including a Balkan band with bagpipes that saw a lot of mantic swirling. 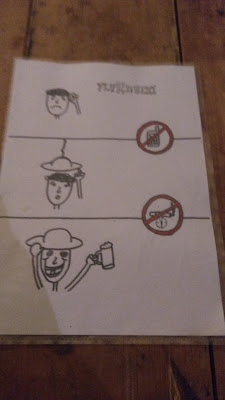 Tavern rules. Hats must be worn. no phones. No smoking. (yes, I did have to use my phone to take a picture of the no phones sign.) 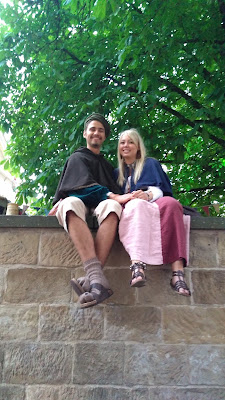 Heroes! some of the intrepid and hard working tavern staff still smiling after three days of it! (hopefully with some time of for their own fun) 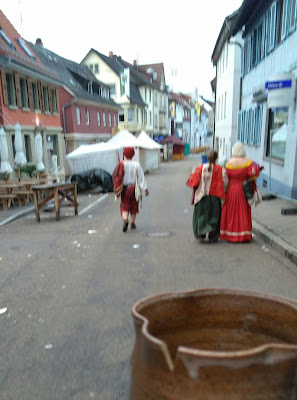 and so it was time to clamber onto the bus for the long drive home. At Calaise I was actually worried that the sadly destroyed loins of my trousers might be an issue but nothing was said. Can they be saved? no.. but yes.. project for next year is to chop them up into a slashed pair with a different colour underneath, and maybe one pink lower leg on the left side. Also a bling gold chain to show my wealth and a peacock feather to show my affiliation with the Holy Roman Empire... or maybe a (faux) furry tail. These look quite cute but were not anything to do with the renaissance furry club and were actually meant to draw fleas away from your own clothes/body and into the tail. 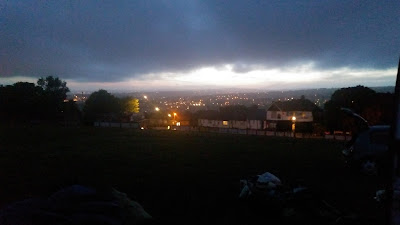 Back on Brighton race hill, the end, until 2018 although there may be a UK event next June as towards the end of the Wars of the roses some European mercenaries were 'invited' to come over and fight and were best known for a battle near Stoke field, however the trials of the campaign saw most of them dead before long, but long enough to get a look in on some British battlefields and so I might get the old yellow-and-red out twice next year and invite some of our German/Swedish friends over here.