A hairy question, or to beard or not to beard.

Last year I was advised that my impression of a french infantryman would be greatly improved if I just went with the moustache and forewent the accompanying small beard (as I had for Waterloo month). My response was that I liked having a beard in my real life the 340 days or so of the year I'm not being a Napoleonic Frenchmen.

Should people have all the correct hair? facial or otherwise? I have seen long haired chaps told that men didn't have long hair in the army at the time they portrayed so they should not either, but again you can't grow long hair back between gigs (of one sort or another).

What if you do two different periods that have different requirements? 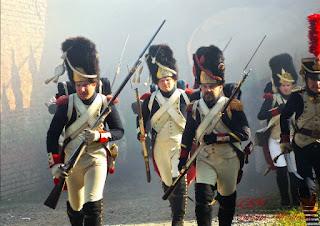 This morning the above picture was put up on a Napoleonic facebook page and amongst the many compliments were many comments of 'What no moustaches?' myself amongst them. Does that make me a hypocrite?

I don't think so. These are the Old guard. The veteran veterans, famous for their facial hair. They have made a fantastic effort on their kit and invested much time and money on being an elite unit.. and I feel that is just it. If you don't want to commit to such an important feature of the look that is Le moustache.. don't join an 'elite' unit that is so well known for it. I have always got the impression that these guys are considered elite in terms of reenactment, with really high standards in what they do, so why make an exception with the face?

Not everyone wants to live with a big moustache. Sometimes including wives and girlfriends. but if you really wanted to do Old Guard and have spent maybe a thousand pounds on gear.. visit a theatrical shop and get a good looking false one.

There, that is that one sorted.
Posted by Rhandolph at 07:29 No comments:

Ickworth house is often the first event of the year for the Napoleonic association although the 45eme were at the Siege of Whittington castle a couple of weeks ago (I was at work, Boo!) and I have not done this event before partly because of being at work (Boo!) and partly because it is a bit in the arse end of nowhere for public transport, this weekend would have been about four hours and four changes each way, including a replacement bus service and then getting from Bury St Edmunds to Ickworth house, fortunately a lift was kindly on offer.

We arrived late on Friday and got on with putting up tents and fire grates and anything that could be sat on. Firewood had been provided but in the form of large branches or whole tree trunks that required two people to carry so much chopping and sawing was done that weekend. We also leant that if you want to push a horse transporter out of the mud it is best to take the horses out first.
A fire ablaze, a few drinks were had and I elected to sleep near the fire whilst it was still going and use a convenient log for a pillow and it was surprisingly comfy, until the early hours when the rain returned and I scuttled under an awning. 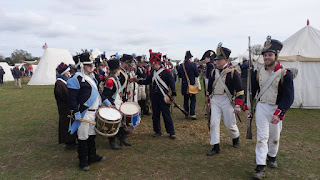 The morning saw a parade and some drill and then form up in the afternoon for battle.. with a difference.. this one was loosely marshaled so tactics and positioning mattered to the outcome!  There seemed a general plan to go forward and engage then drop back and try to get the British to march into an artillery ambush from a concealed position.
I was in the first group of skirmishers and told to go forward to a fallen tree and engage some rifles on the right, in my own personal head this meant me, my first command! although everyone knew what to do. I did get to point at some enemy soldiers just like a Sergeant in any given wargame. 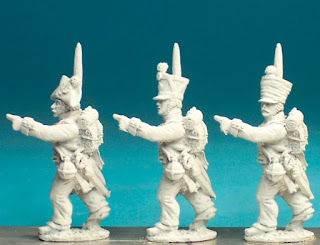 'Look! enemy soldiers over there!'

I also got to shout 'l'arrière!' Fall back.. (Run away, run away!) as dozens of the enemy surged forwards, like a Frenchmen in any given wargame.
Some British dragoons, Prussians and Brunswickers had been put on our side to boost numbers but the red and green tide was too much and the artillery ambush was hemmed by friendly troops in the line of fire and then the big gun that was perfectly lined up did not go off! The rest fired but the enemy didn't even falter.
A couple of their units did suffer a death by being assailed from two sides at once. AHA! but it wasn't enough to save the day.
Another difference was the audience were not taped off behind a fence but could follow the battle and move around, which was a nice touch, rather reminiscent of golf, and no one got in the way either.

That night saw the usual jollity of food, drink and the odd song with a whole tree trunk on the fire, big enough to keep burning through a couple of outbreaks of rain. Dawn found everything coated with frost and ice but it afforded me a pleasant stroll around the country house and gardens when few get to see it so being so peaceful in the morning light. 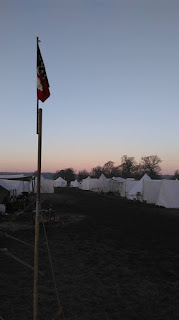 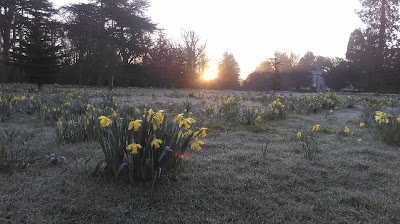 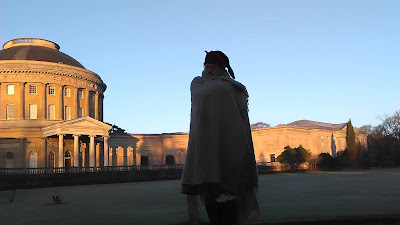 More breakfast duties and much the same agenda as yesterday.. except for a photoshoot and artillery display and more people to talk to as the weather proved much sunnier than the day before.
The battle was more of a set piece affair but each unit sent a few troopers to form a surprise rear attack, clambering over a wall and trying to stay tucked out of sight. We all awaited the battle to commence but apparently the British commander was having a cup of tea. 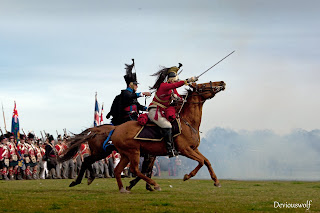 Then it was off. A good back and forwards display after the initial surprise. My musket didn't get many shots off despite having changed the flint before the battle and kept clearing the touch hole which seemed to be the main problem, lots of flash in the pan, so I went down when a rifleman picked me off.. only for Corporal Dubonnet to haul me back to my feet 'You can't die yet your a shooter!'   'No corporale, I can't get much out of her now.'     'Oh, alright then.'
I was back up though and the five of us out on a wing to protect a cannon charged a dozen Brits and got snuffed out. Apparently we had been called back but no one heard the orders, you really can't communicate even on a small battlefield. 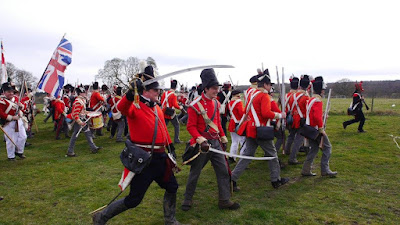 Everyone had a good time and it was good to see folk I have not seen in a while, the weather certainly added to the event.. a conversation was had on whether new recruits might be put off by it, one new chap had never done a reenactment event before or ever been camping.. but people are usually forewarned about these early events and there is no reason you can't just come alone to summer ones, or bring a shed load of blankets/covers and thermal undergarments. 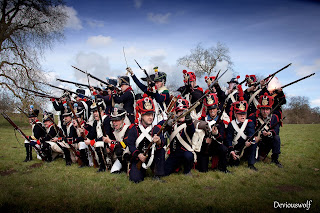 Year four off with a bang!
Posted by Rhandolph at 06:45 3 comments: