I feel rather beaten up today and I haven't even been beaten up, cut down with a sword once and dragged along the ground on a rope, but not actually beaten up.

On a side note I am writing this on my tiny phone because my obsolete decaying computer apparently won't save pictures to put on the blog, and the cat wont give me any peace. So I apologise if the format goes a bit funny.

My first event of the year, was really hyped up for it. Quite a big event and sure to see a lot of familiar faces, weather forecast was good too, no dropping below zero business this year.

Three of us set off early. Then the car died. 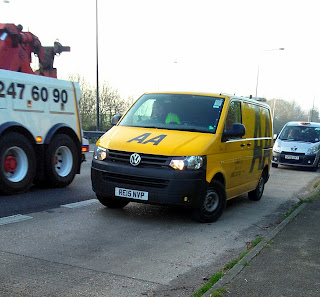 A long story unfolded but we arrived in the afternoon.  Arriving in style literally minutes before marching off to the field... 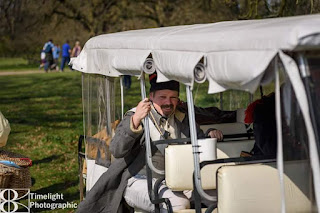 The only way to go to war.

It all comes back to you pretty quick and I realised I'd loaded my musket without a thought. First volley off, good to be back in the ranks.

We can tell how well 'The plan' is going by the amount of profanity from the Captain and it was clear units had gone awry, some cavalry horses also decided to join the audience. It was one of those days. We beat some riflemen to death and advanced down the field. Getting quite a few rounds off. In another melee I found myself behind the first line, cludded one officer and came to blows with another..
'Hello Rhandolph, do you know whose supposed to win today? I haven't a clue.'
'No, I don't think it was decided. You can kill me if you want.'
'Ohh, okay.'
'Aàaaaaaaaagh.' 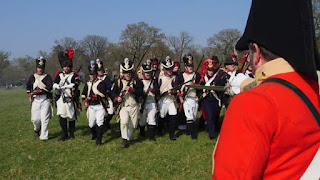 I say you rabble, stop there!

Back to camp, water, clean muskets. Get food on. I brought some turnips and a purple French carrot but had planned to boil the turnips earlier but late arrival stopped this, also I only had a shallow pan so it half boil, half baked sort of effort. Worked in the end though. 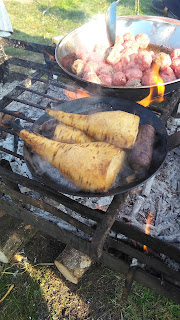 That evening there was a tug of war contest between camps, it was during this that I ended up hanging off a rope 'like a sloth' and being dragged along. Sadly the British had the best of it, although the artillery were best of all, all that time dragging and pushing cannons about pays off. 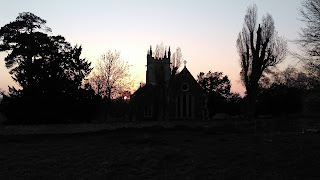 The evening got a bit cooler and it was sitting round the fire, a bit of singing, some strange concoctions being passed about. Then time for bed. When I woke up I found I was under a strange blanket, Alex had kindly come over and put an extra blanket over me. Aaah. 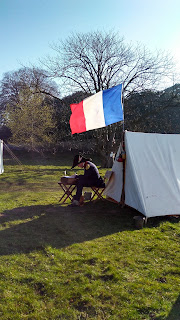 Sunday, what a busy day. Breakfast left overs and black coffee. Parade up to the house. Drill practice including a new formation change which I was pleased to pick up. Sentry duty. Then some filming for a promotion video.. about half a dozen of us and a borrowed redcoat, I didn't feel it really captured the experience, you need more bodies. Oh well, maybe part two of filming next month and editorial magic will deliver the goods. 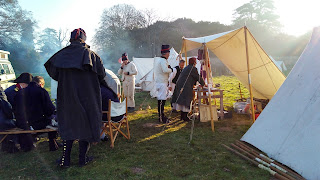 Once again we arrived at the field of Mars in time to wait about. Then on came the cavalry, who made a swirling melee before riflemen appeared and drove them away. A battery of light guns opened up at us, and we advanced close enough to trade shots with a huddle of Scots and the rifles, who fell back, but then came British reinforcements and we were pushed back and forward. Firing away, they were great cartridges, tightly rolled and full. One of my aches today is my right shoulder with a slight sore patch and I wondered if it could have been from the musket firing.. but to be honest I think it is more likely from the strap of my pack on that side.

For the second time in the weekend some  riflemen were trounced, with Captain Miles fighting their officer.  Outnumbered we could not take casualties too soon but as the enemy loomed and we were near the crowdline the end was nigh. 'Start to take casualties with the next volley!'
The volley thundered.
No one went down.
'Oh I thought you were doing it.'
Next one though was more lethal, an actual mound of dead started to form until told to best leave it before anyone got squashed. A few survivors may have made it from the field. 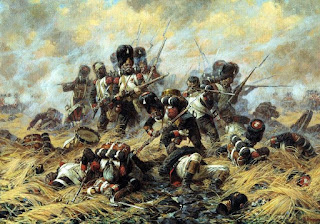 Lacking any photos I have substituted an artist's impression of the final scene.

One thing remarked upon was the number of British officers, Ickworth has a lot of British units, but not necessarily with a lot of men, but always an officer, and a couple of officers who didn't seem to have units.. so when formed up a small block of redcoats can have about three or four big hats, that or a very small units whom personally I think should either skirmish or attach themselves to another small unit. A unit with less than six does look a bit silly sometimes especially if it includes a colour bearer and an officer.

And so packing up time, I was feeling a bit drained by now. A good start to the season though. May and all of June look to be hectic, with five events in six weeks in four different countries, A reenactors life for me!
Posted by Rhandolph at 10:06 No comments: