Invasion Kent, the Eagle has landed!

Hole park lies in the heart of Kent, where moss lichened church spires rise over sleepy villages, the local yoeman always has a drop of Watney's red barrel on tap, and folk keep olive oil and white wine in the pantry, just next to the shotgun.
Here would be the second invasion Kent event after the success of last year.

I will provide some vignettes of the weekend as I am a bit pressed for time, back Monday evening, busy Tuesday, writing this now and off to Belgium not long after work tomorrow. Got to keep up!

I arrived Sunday mid morning and was happy to go and stand sentry at the bridge between camps, Waterloo bridge to them, Austerlitz bridge to us. Because we had the country house, the traders and most importantly the ice cream van on our side there was a constant flow of British/allied types back and forth.

Whilst we don't usually do saluting much in the 45eme it is good form to acknowledge the other sides officers and colours by presenting arms and I soon came to recognise all the officers and so smooth at presenting arms that my frizzen was just coasting snuggly into my naval each time. 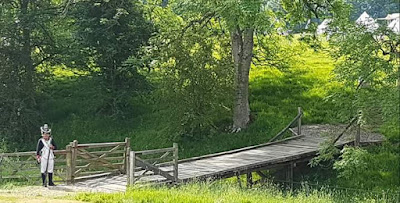 Also I learnt that you don't have to salute an officer who isn't wearing a hat, he has already lowered himself so far by this act you can ignore him.

Speaking of learning we had a new chap in the ranks and he came to take over. It was good to be able to pass on some simple drill and tips, and vocalising orders instead of just responding to them helps them stick in the head. 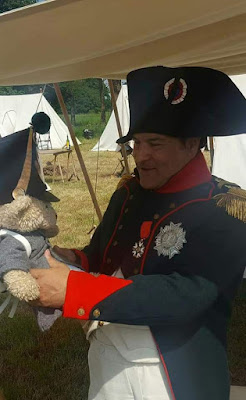 On the Monday I was near the bridge and a couple of comrades when our very own Napoleon-a-like John came over and we resolved to take it. He was quite deadpan as he told the surprised and wary British sentry where to go. The Emporer and myself on point we awaited the response. Sure enough a squad of redcoats lead by their commander in chief were soon assembled and marching on us so I withdrew at a suitably dignified pace. Still it caused a stir on both sides of the ditch. 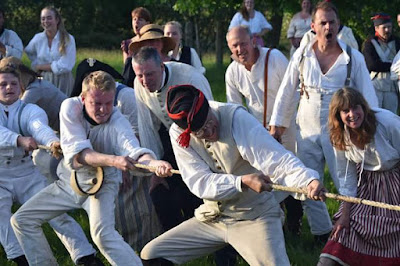 The Sunday night tug of war.

Both battles will be remembered, but for very different reasons. Sunday would be the French victory and in typical style the British marched on and were repulsed, ourselves helped by about seven cannons, and once repelled the British withdrew to the far side of the field.
And stayed there.
To encouraged them we fell back nearer the crowd line behind us. Still nothing.
Eventually the drums were heard, causing one of the loudest cheers they'd ever got from the French. They advanced up the long slope, but never reached us. Often in neatly unit-identifiable groups, they fell to the guns until it all ground to a halt as if against the wind and a few survivors wandered off the other way. Right. Okay.

Monday was a great battle, intense and visually impressive. As my ankle was playing up from overdoing it the day before I decided to die early and dramatically to a cannon shot. Soon after some friendly riflemen dragged myself and a dead comrade over to a barricade so we were not in the fire arc of a battery of guns. Propped up I could see the valiant French falling back, making the British pay for every foot. A skein of smoke veiled all, the ground shook from the guns and rockets shrieked overhead. It really was a sight to see as the French turned on an artillery battery then fought to the last behind a second redoubt. Sometimes everything just comes together and that was exactly what happened on the Monday. Quite remarkable.

Let us hope facing the Prussians at Ligny will be as satisfying, hopefully with a few more of them after last year's floods stymied a lot of travel. Our penny packet of soldats will go onwards, with the eagles to Belgium!

Posted by Rhandolph at 08:48 No comments:

The 45eme had decided at the AGM to look into making a promotional video, both for potential recruits and any organisation or historic venue or event that might benefit from a top troupe of French infantrymen being in tow.
Just after arriving at Dover Western heights for the first weekend when it didn't rain on one day or another... We were off to do some shooting, in both senses, in the woods nearby. (yes, I know you fire a musket ball and shoot an arrow, but if your going to be picky a gun is only really a gun if its on wheels!). 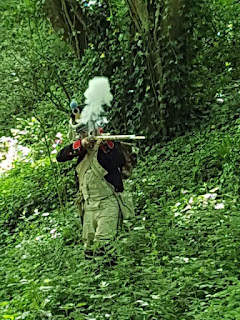 Through out the weekend we did about five brief scenes, one with some British who apparently refused to die. Nothing new there! And a couple with proper face planting falls or misfiring at a dramatic moment.  It will all be married up and hopefully treated to some cunning editing and an inspirational soundtrack. 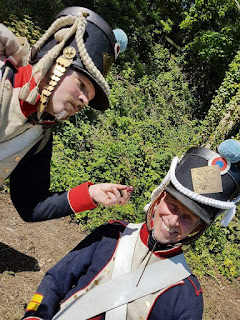 Owing to traffic problems we didn't have all the set up for a camp scene including some music, and gambling, and food, and orders being written.. These would be done on the leisurely Sunday morning. There followed some drill though we instead did a brief talk and had a firing competition. I had no misfires but lost some seconds rummaging for cartridges as some unfilled tubes, and some spare flints,  were also in my giberne.

I confess I have alluded to Dover, as a town, being a bit grim previously and was pleased to see the Banksy EU painting and eat at a quite pleasant bar/restaurant right on the quays although a couple of us did have to charm a bunch of guys making 'French' comments.. the leader of which looked like the bloke from Bad manners in a suit and claimed to be the mayor of Dover. I had the seafood spagetti and a few German beers. 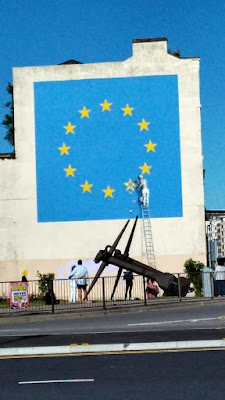 Back at camp we had an excellent view of a fireworks display down over the harbour and then a couple of us went up to explore around the main fort. 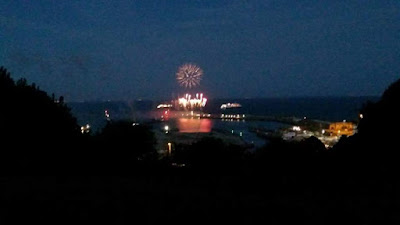 Despite having a mini torch I stepped off a step into a earth worn area and didn't see a small border around it.. foot hits, foot turns, sprawl in undignified manner. Get up. Hmm, ankle little bit ouchy but never mind. Next day, still a bit tender. Go to St John's  and it was swollen up, they didn't like the look of it but my feeling was it wasn't that bad. 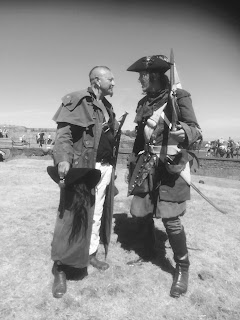 I would get by well enough by favouring the other foot, and using my musket as a prop on slopes. Something day after day of drill knocks out of people is initiative, but reenactors of course don't get drill day after day. At one point when Duncan was talking about uniforms to the crowd he alluded to having a volunteer from the ranks.. followed by a pause.. is he asking for a volunteer? silence. I step forward. oh no, he isn't asking for a volunteer. Steps back. Feels like an idiot. Vows never to do anything again without direct instruction. Probably. 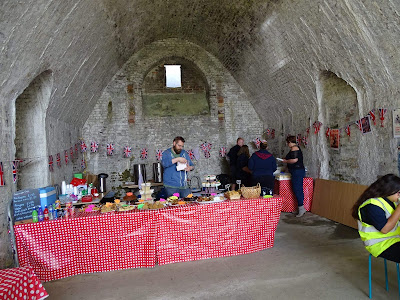 The afternoon skirmish was shortly after this, and our modest numbers were greatly improved by the Romney marsh smugglers, some of whom were also in the British 16th but happier to join us. Smugglers on the coast were a power to themselves laying siege to excise houses even as boats were unloaded a hundred yards away, and often had dealings with the French to obtain the very goods for smuggling in and out. Some French prisoners are recorded as having escaped from England on Smuggler's boats. 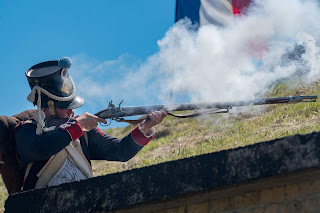 It's always a good skirmish, and for us it was pretty much all individual action, small pockets and a line of the enemy being engaged. Despite having just changed my flint it wouldn't spark until I changed it again, then I got a few more shots off. A party of the smugglers died facing the redcoats, the last in a valiant charge.. and then the enemy numbers could, with enough fire, not fail to miss us and I fell casualty.. momentarily struggling with my last gasps to get the sun out of my face. 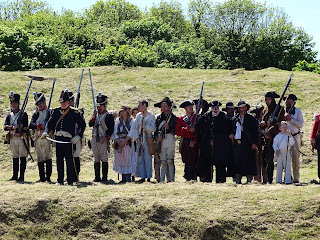 All done I had been asked to pop back to see the St. John's people.. alas still swollen and they wanted me to go to A & E, not just when back home, but now, on the way home. That didn't happen, as a post note it turned out to be two torn ligaments, swelling gone down a bit but bruised. Orders to not strain it for up to four weeks, next week I shall se how it feels..  for Hole park, probably the biggest Napoleonic gathering in the UK. See you then!
Posted by Rhandolph at 03:56 1 comment: