On October 15 there was an American civil war reenactment at a place called Middletown, eighty miles west of Washington. It would have been a fairly typical event, as many that had been held there over the years. Except this year threats of physical violence had been sent to attending groups in an attempt to keep people away. It didn't work, despite a suspected pipebomb being removed, and the two sides came together in a particularly fond embrace, shaking hands and singing each others songs. They wanted to send a message that their hobby would not be stopped by terrorist threats or politics. They were not there because of politics, nor would contemporary politics stop them. 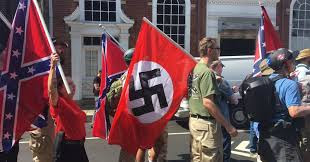 This was part of the ongoing conflict of interests about confederate flags and symbolism in America, after Charlotteville, where ACW reenactors have been quick to point out that no one there was a reenactor. Sadly however there were people there waving nazi flags and KKK flags right next to those with confederate flags.. and the latter didn't seem to mind. This paints a bad picture for anyone else who flies the flag.  The issuer of the threats above of course seemed to find both camps viable targets so what was the problem? the Washington post referred to the unknown faction as being an 'Anti history group'.  As I write I see an event at Mannasas has just been cancelled.

Could similar happen over here? I have never known people to be so divided into two vague camps, the right wing is on the rise with Germany and Austria now having members of dodgy groups sitting in Government, and clashes between left and right sure to escalate, could a backlash see WWII German reenactors being assailed or not invited to third party events? or Victorian British or Prussians? Parlimentarians? Soviets?

Wherever there is a large mix of people meeting for a non political reason there will be a nationalist here or there, reenactors are generally interested in military history as a common ground. This can be nerdy and also involve toy soldiers as well as social history or sometimes it could be an ex military bloke, still following the flag and possibly taking things a bit too seriously.

Until the age of social media members of a reenactment group could be meeting up a dozen times a year for events and all having a great time together yet possibly not know what a fellow really believes in or what party they follow. Politics and religion: Generally a no go subject around the camp fire. 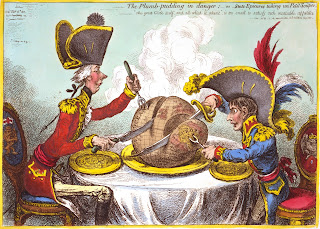 But when your facebook friend-through-reenactment suddenly posts up a UKip poster and shares a fake news story about an 'innocent white man' being sent to prison for twenty years for leaving a bacon sandwich within half a mile of a Mosque..  its facepalm time. What do you do next time you meet them and they sing 'Ich haben ein Kameraden'? or even 'Rule Britannia'..   Break into 'Le international'?

As well as politics now there is politics then. In any era I would chose the army closer to my own ideals and for some this is a must do, for others a complete irrelevence.
Take the English civil war, many soldiers will have been drummed into the local forces whether Royalist or Parlimentarian or because their peers were signing up, if professional soldiers it could be fighting for who ever holds the purse strings.. but for some as for a would be re-enactor they have to decide, for some it is a political choice.. I doubt many present day republicans choose to fight for the King, even one that has been dead for over 300 years.

I remember seeing a news feature on the anniversary of the death of Charles I and a reenactment group was on hand, some of whom were interviewed and one woman was adamant that the foul parlimentarians had MURDERED King Charles, it was no act, she seemed really angry at those F&^%ing roundhead scum. It was personal. 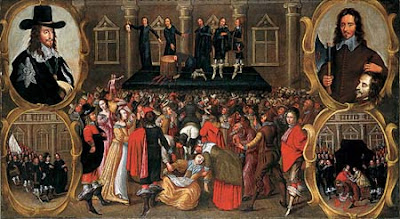 I am a 'fan' of many things German/Austrian.. and sympathise with regular German WWII soldiers who were conscripted and whose families could suffer if they didn't show proper commitment to the Reich, these things are seldom simple as good guys and bad guys, but I would not wear a WWII German uniform now, maybe once, but not now.

One step up, or down, from that is SS reenactors. Even other re-enactors often shake their heads and say why?  given the examples above I will always have that doubt about motivation, you chose that uniform when you could have been Luftwaffe field division, paratroopers or regular army? They must get it in the neck all the time from the public and sit around the fire bemoaning how misunderstood the poor waffen SS really were.  Yet we must not forget that there were the SS in the historical reality of course. They do have some quite nice gear, and tanks, much cooler tanks, but still, NO. I realise now I have started thinking in my David Mitchell voice, obviously thinking of Daryl the Peep show Nazi.

So yes politics is usually avoided within the hobby, but not always possible, like when you are travelling with nine people in a minibus on election Day or fifteen hours on a coach with thirty people a few days after Brexit, going to an event in Europe and wondering how difficult it might become, goodbye EU health cover, open borders and Firearms passes... You can claim to 'not do' politics but politics will still 'Do you'. 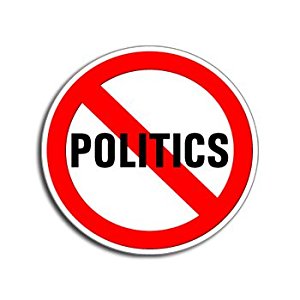 Reenactment is a great hobby, with many open minded people from all walks of life, many find getting away from it all for a few days a huge part of it. No news, no TV, little or no social media, and like the Union and Confederate soldiers on October 15, let everyone come together on one side.
The contest is over, but let the history live on. 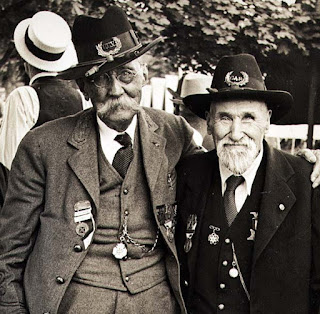 Posted by Rhandolph at 08:29 No comments: