The sands of time.

The chances are you have either never heard of Jaywick Sands or you have had the misfortune of seeing 'Benefits by the sea' in which it was featured as the seaside town that never closed down, except its not really a town, more of an appendage of Clacton-on-sea. 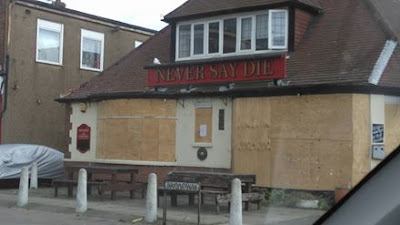 Yet here was where the French invasion was to begin! One small problem was that owing to other commitments, geography, randomness and time allocation (There are 45eme events on for the next three weekends..) there was only one Frenchmen. Moi.
So the Kings German legion/Polish artillery, Prussian landwehr and a portion of the rifles were ordered to French up for the weekend.. but who would lead them? Who was a dedicated Frenchmen with a big hat in his wardrobe?  Moi.

There was an officer's meeting just after I arrived setting out the plan for the day and then a walk up to the ridge by the beach to have a run through of the battle plan and address any questions, point out pyros and where units would be starting. Sounded like a good scenario, naval bombardment, surprise attack from the right hand beach and push the British back into the tower before storming it and raising the tricolor!  Day two would go the other way. 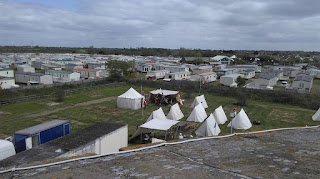 There was a public tour of the camp with short talks, accompanied by the Mayor, and a volunteer from the 11eme was shot, several times before he would shut up.

Battle!  The sun came out and we waited on the beach for the last pyro (on top of the tower) to go off as our signal to advance. It didn't go off.  Instead a small group of redcoats appeared at the top of the beach and we took that as a cue to advance in two groups of infantry and the artillery, dragging the guns up to the ridge and beginning an exchange of cannon fire. The two units marched down the slope, I actually remembered all the French commands quite well but sadly the men didn't speak the lingo so each was followed by a quieter subtitle-esque translation for their English sensibilities.

One of my favourite moments was being between the two units and ordering a big volley, swishing down the sword 'FEU!' and every musket going off.  I then took the 11eme off to drive away a couple of skirmishers before wheeling on the remaining gun crew. It was funny looking to the experienced Rifles sergeant and realising he was waiting for me to tell him what to do next. 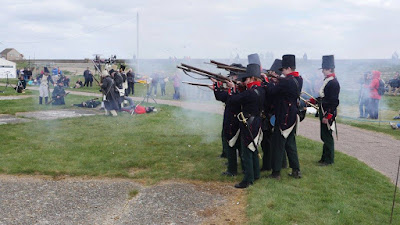 One of the cannons was brought down now that the remaining British had locked themselves in the tower and were firing from the roof.  Boom!  no more door, and we all raced in to deliver the coup d'gras. 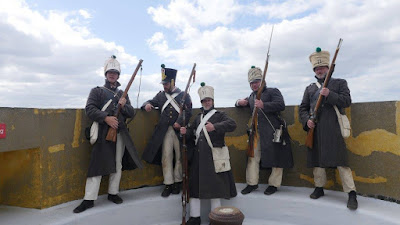 The 11eme take a moment to enjoy victory! 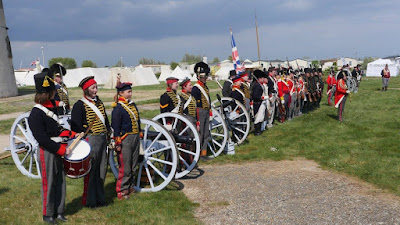 Form up to address the crowd and give a cheer.

The crowds dwindled away although throughout the weekend bemused locals would turn up and ask 'What's going on?' some came out because they heard the artillery demonstration or the battle going on.. next day the cannons were fired particularly to attract people.
Filming!  The Napoleonic association were making a short film/advert for the Hole park event in Kent and wanted to suggest the French had landed and the invasion had begun. First scene to be filmed was a fusilier throwing a grenade into the tower and blowing the (bloody) doors off. I was amongst those who went in afterwards (and after a couple of takes) and I have never been in such a smokey atmosphere, everyone was coughing and trying to get upstairs as soon as possible. 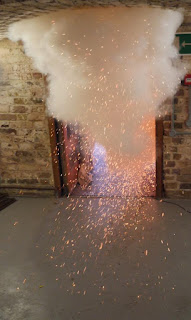 That night there was a sortie for fish and chips and a slightly different sing along to usual as it involved a stereo in the British camp playing tunes, I mostly remember Queen and lots of squeaky voices.
During the filming I'd learnt that a few people were staying in the Martello tower and decided to join them, finding a nice tucked away spot by the tea shop, although sadly there was no tea at that time.

Breakfast was bread and sausages but I had forgotten to pack any cutlery bar a wooden spoon and no bayonet or skillet! I discovered a metal tent pin is handy, you can skew two sausages and the hook at one end stops them falling off.

Despite the egalitarian fare it was off to the officer's meeting again and suddenly redcoats and greenjackets were nodding and saluting 'Morning Sir!'  My response was a sort of half salute.. half wave.. and a well meaning nod. Maybe it's something you get used to.

More filming took up a large chunk of the morning, over running the tower with some Errol flynn moves, running up a beach and peering over an embarkment at the tower then giving the wave for about twenty soldiers to go over the top.. except the grass was slippery and it took three takes before no one slipped over and sprawled on the top. Second time may have been me. Then next take.. BooMTishBoomTishBoomTish.. the nearest caravan started blaring out music.. not quite the soundtrack we wanted... and Tony had the unenviable task of getting the guy to turn it down, it went quiet except for a vaguely feminine voice that shrieked 'HAA Am I MEANT TO DO ME FECKIN' DANCIN' NAAA!'
Lastly came the beginning.. Napoleon landing on the beach! both film and still shots, which came out rather well. 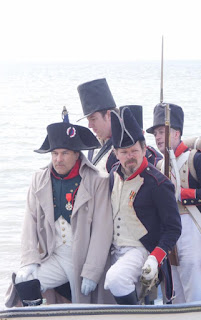 Before the battle I was asked to accompany John aka Napoleon around and along the line of the public, calling on them to cheer the French and accept the benefits of civilization.  It didn't go down well. They were worse than 'Dover".
So we awaited the coming of the enemy whilst the announcer regaled the crowd with fascinating facts. Then we waited a bit longer and the announcer had to delve deeper and deeper into her repertoire.. and then the colours appeared on the far ridge. Napoleon found he was needed somewhere else and I went to join the men falling back into the tower and barring the door. 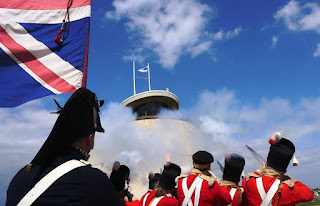 There was no way on earth that Frenchmen in a 'Castle' looking down on a party of English was not going to rapidly descend into Monty Python.
Finally the (bloody) doors were blown off and on came the rush of redcoats to end our gallant resistance. The union flag was raised once more ending the mock tearful complaints of the ex-army NCO who had been given the job of keep running the French one up all weekend.

And so the weekend drew to a close, a good experience and despite our jokes Jaywick was okay and the people were welcoming enough. The council had been much behind the backing and if happy then the tower might see more action next year.  (Good pictures in this piece by Alan Balding) 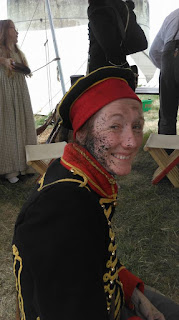 Next stop, a long cannon shot from last years spectacular Waterloo,  Ligny!
Posted by Rhandolph at 12:01 No comments: