URGENT CALL FOR FRENCH SOLDIERS!  said the e-mail (paraphrasing). The 95th Rifles were having a training day at Landguard fort and Sky TV were going to be there filming a documntary, the details of which were sketchy, and wanted people from other units to attend. It was all rather short notice, and quite a long way away (Felixstowe) and I did uhhhm and arrrh but felt the French had to be represented, especially if it might be on the telly!

I had plenty of time on the train to peer out the window and consider things I might say if interviewed. All the travel was painless, even the underground jaunt, which featured a surreal moment of an underground carriage containing a French fusilier as well as a clown and a unicorn, and lots of people 'not really looking'.

Two things on the day also reinforced my earlier thoughts about bread bags and how I disagree with some folk who feel French should not have them, as they were not official issue.. firstly all the riflemen have bread bags, and when the enemy have something it won't be long until some filter into the other side via loot or trade and more importantly now that I have a proper backpack I appreciate how much I DO NOT want to keep taking it on and off.
Travelling in a greatcoat makes the pack fit even more tightly, you also have the blanket on top and maybe a tin cup attached, plus your cartridge box, bayonet, canteen etc to get in the way. It is an arse to take on and off.
The French when on the march stopped for five minutes in each hour, with five minutes to have a drink/smoke/bite to eat and a sit down you don't want to spend precious time awkwardly wiggling in and out of your backpack. you are tired and want to just flake out, grab whatever you need from a handy source.. like a bread bag. The argument that you don't need anything else to carry stuff in is abit like telling someone travelling on holiday that they don't need any hand luggage because they have a suitcase. I consider this valid experimental archeology.  Most renenactors seldom travel more than perhaps half a mile from the campsite and then can leave unnecarsary stuff behind. I even left the pack on when on the train, sitting slightly forward on the seat and resting my head on the blanket roll. Conservation of energy is a fundemental rule of the universe, it also applies to soldiers on the march. 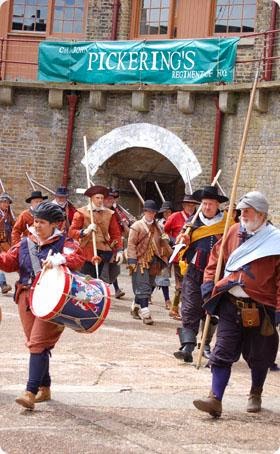 Landguard was the scene of the last opposed seaborne invasion of England, by the Dutch in 1667, and is commemorated each year in 'Darell's day.'

I met Rob from the 45th outside, so was not the sole Frenchmen, and There was a warm welcome at the fort and it wasn't long before the Sky correspondent, Lucy, came over and asked to interview us. Which she did with the two of us, first question being who we represented and why French?  This was exactly the question I had been thinking about on the train and COMPLETELY FORGOT nearly everything once the camera was actually on, I even called Rob.. John.. although he didn't notice at the time. I think between us we got through it quite well. As well as ourselves and about 20 rifles there was a horse artillery crew (sans horses) and a single redcoat whom I was glad of as an example that not all Brits wear green. 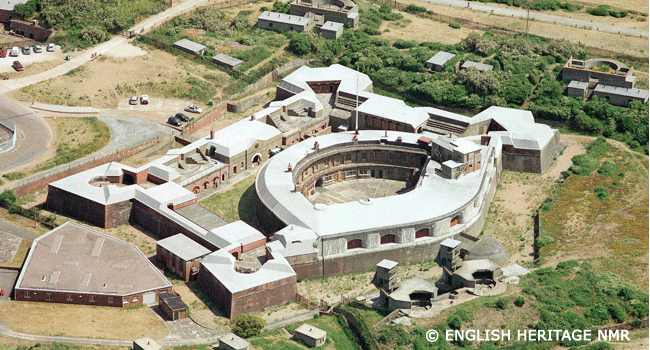 The Greencoats were off to the beach for drilling and we tagged along.. chatted with the locals who were generally familiar with events at the fort and were keen to know what was going on. We fired off a few shots although my flint needed changing, having not sparked I then got the next shot off with a charge and a half in the barrel which made for an impressive bang and a proper bit of kickback. Then there was lunch and cups of tea amid more interviews. The possibility of a (hugely outnumbered) skirmish never came about so we found ourselves with seven or eight cartridges left to dispose of, up on the fort wall and the Lucy came with us to see how it was done and unlike the poor artillery crew who repeatedly had misfires infront of the camera we got off a good number of shots and chatted away, she seemed keen to make sure the French got a good look in on the show. though maybe she was telling that to everyone. Then it was back to Brighton.

At London bridge some young guys asked me what was in the (gun) bag and were keen to have a look, which I had to decline of course, waving a gun around at London transport hubs is not generally appreciated. On the way up I had been asked what was in the bag by a security guy on the underground and had to get the musket out, he was fine about it and I suspect was more interested in having a look-see for himself. I carry my papers with me and have asked British transport police at work whether they had any issues with people with guns and were fine with it, as long as kept in a bag and being taken somewhere for a good reason.

Sunday morning I gave the gun a good clean and was particularly pleased to discover my brushes screw on to the non business end of the ramrod to clean the barrel out. I really enjoyed this, yes cleaning something can be fun! and intend to make it a morning after ritual after events. I suppose I should think of a name for my dear musket. Suggestions on a postcard.

The upshot of the filming seemed to be that they would be deciding whom to follow in later episodes of a show called 'Weekend warriors' at events over the year, including maybe wearing a shakocam at events... and to be shown to tie in with Waterloo 2015.  Watch this space!