Welcome to the order of the fried egg!

Medals in the world of reenactment are a subject of debate and controversy. How does someone earn medals in battles that are usually loosely scripted and with a predetermined outcome? who decides if someone should have one?  Well, no one really except the wearer.

When I went to Jaywick prepared to be an Officer I decided to put one of my Waterloo medals on to 'Top brass' my uniform up a bit, it was still on there when I packed it for Ligny and I decided to keep it on, particularly as the ribbon is in Belgian colours, but did feel a bit iffy about it a couple of time. Historically most soldiers would only don medals and plumes and fancy bits and bobs for parades and dinners and such events.

There is a school that feels you should not wear an historical medal unless you are actually entitled to it, and most medals I've seen are just for big events. Some people might frown at historically inaccurate (made up) medals, some people will frown at the opposite. 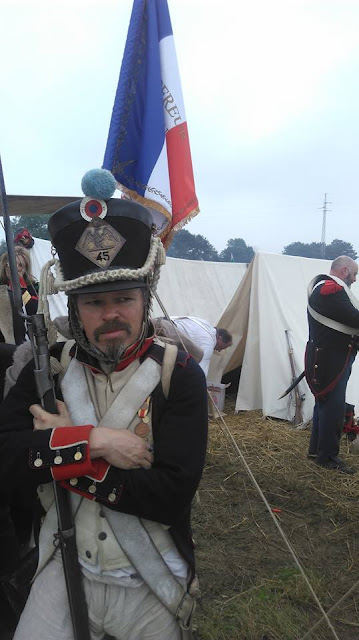 I mentioned a facebook thread I'd seen about a world war two reenactor (pictured below) to a friend at Ligny familiar with some other eras and he quite agreed, I hate to generalise but the worst offenders in Blingology seem to be WWII Germans.. 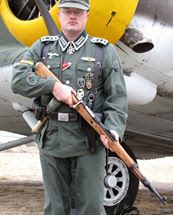 He has nearly every medal a German can get, including the Iron cross, first and second class I believe (I'm no expert) and to me the worse thing is.. if he has done so much to earn them.. why is he still a f*%king private soldier guarding a plane on some airforce base with a rifle?  all that and not one promotion?

In America many American civil war events give out medals for events, they can build up pretty quick!  but again you would not normally wear them into battle at the time.

I've also seen the odd person in a habit (jacket) with long service stripes who has borrowed or inherited the garment and not taken them off. I feel a bit iffy about that although those in immediate circles generally know the score.

I have to say in Napoleonic circles people seem quite restrained, the Old Guard at Ligny were not covered in 'The Legion of honour' medals although paradoxically quite a few of them probably would have earnt it, as would many officers, but there is not really a way to get one unless you pin it to yourself.  Maybe some sort of commitee should be formed and award medals to those making a great contribution to the hobby?

*goes on ebay. types in Leipzig medal. Curses at results*

Ligny! (pronounced lin-ee) Napoleon's last victory, whracked by many 'if only..' moments just like the rest of the Hundred days campaign. The battle is refought most years although after last years bicentenial 2016 was going to be a more modest affair but would hopefully attract a good few hundred.  I was particularly looking forward to facing a Prussian army instead of the familiar flurry of riflemen backed up by ranks of redcoats, if only for a different aesthetic it would make a nice change. 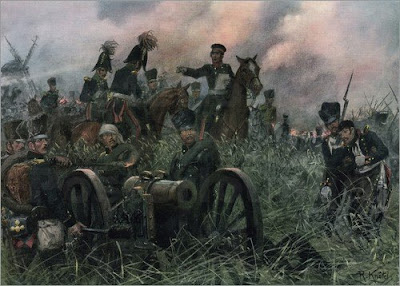 Myself, Flapjaques and Bob set out early with Henriette, Charlotte and Edith in the back with the rest of the gear and after going to the slightly wrong Ligny (in France) ended up at the right one in Belgium. 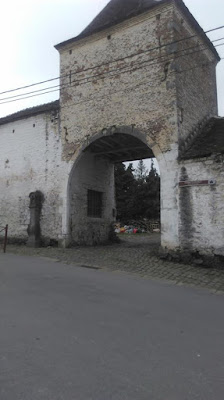 One of the few remaining buildings from the time, held by the Prussians and stormed and captured by the Imperial guard.

Having got unpacked with the help of some local volunteers to sherpa stuff into the field and put some tents up we wandered into town for a drink and bought a few provisions, including a lovely meringue-cream cake and some ridiculously cheap wine (by UK standards).
Everything was so well organised, the toilets actually had little sinks and flushed instead of being the usual hole above a cess-pit design. 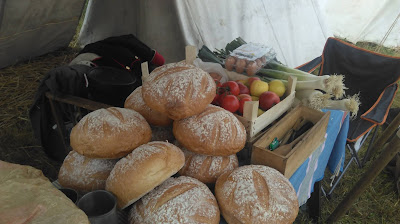 Part of this generosity may have been that some units had failed to make it or had less troops, parts of France and Belgium having been badly hit by rain and flooding. It soon emerged that the Prussians would be rather outnumbered and in fact had no line infantry, it was all light division bods including quite a few Brunswick Jeagers, so no Prussian blue at all. There was also another event at Bourtagne (?) going on up to the North-East of the country that had drawn Prussians and French, such as our friends in the 85eme. Wavre is also on just down the road in a couple of weeks.

It was a relaxed event with plenty of spare time but at 14.30 on the Saturday there was meant to be a drill session, we were the first unit into the field, soon after followed by the jeagers.
One strange turn was that the peleton was veering slightly to the right when it was meant to be marching straight forward, no one really noticed that they were doing anything to put the unit off course.. until it was discovered to be all down to one elbow. Everyone tries to remain in elbow contact to the soldat next to them to keep the line together but at the right flank was our drummer, Naomi, and each time the person on her left pushed his elbow against hers she understandably moved a fraction right so as to be able to keep playing unobstructed.. to which the soldat moved slightly right to re-engage and so did the soldat to his left and so on.. so that the whole peleton was sliding a fraction right all the time without knowing it.

Belatedly most of the French then came on and we stayed long enough to be noticed before marching off.. Not quite! literally stopped at the gate by the designated commander who was incharge of our combined group, which seemed a bit of a cheek to me as between us and the sappeurs (who we usually work with) we outnumbered the troops this Lieutenant had brought with him and so also had more English speakers than French leading to James, who speako the lingo, having to interpret everything, although nothing could interpret the 'Why are we doing this?' moments.
After a break and a beer (not much, if anyone was found to be drunk the whole unit was to be sent off the field).. the battle! 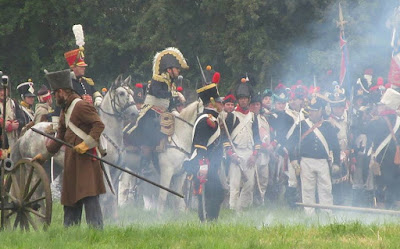 I was happy to get a lot of firing done, about ten rounds in a row, after the misfires of Ickworth. I imagine the open order of the Jeagers must have saved their modest numbers from being destroyed by such vollies. The pyrotechnics were done well, timed well with the cannon fire and close enough to units to look like near misses.
We were ready to 'Do our own thing' if we felt the plan was dull and unrewarding, as we felt so many people had travelled a long way and wanted more than just trampling forward and firing a few shots. It was also mostly going on quite far form the L shaped area that the public was in. I think this was my only niggle about the weekend but probably had nothing to do with the fine work by the organisers. 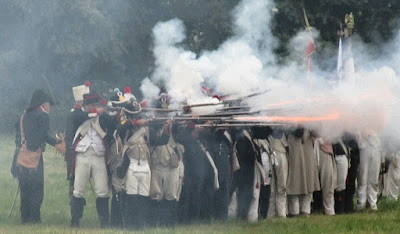 It all ended closer to the spectators though, maybe too close as we marched forward shouting 'En avant!' with bayonets fixed right up to the audience line before being stopped at the last moment. I noticed after how firing so much with the bayonet fixed left a pleasant dappled patten from silver to charcoal grey up the blade.

Sunday morning we were all woken up by a single drummer playing a really fast beat and a slower one at the same time.. DingDingDingBANGDingDingDingBANG.. and this went on for what seemed like ages.. so much so that it was like every soull in earshot generated a sigh of relief when it did end.
Sunday also saw a parade around the town, and again we seemed to be first unit to turn out for it. and promptly wait for anything to happen. We expected to stop at the local memorial but only the Guard were in attendance whilst the rest marched back to camp.. and that was it, free time! 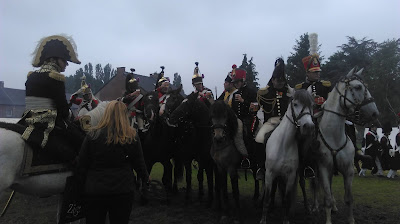 Don't drink and ride. Ten minutes after this picture was taken there was an eight horse pile up.

Arsehole of the weekend award goes to the French Lieutenant who chided me when on (voluntary) sentry duty for holding my musket to present arms in a hurry to two officers (who didn't actually notice) slightly right of centre and having moved my arm to the left 'jokingly' told Duncan to put me on a charge. Duncan diplomatically just nodded and shrugged.
He returned next day when we were waiting to go on the parade and again 'Jokingly' chided one guy for having his collar tucked up, another for having muddy shoes and a new guy for having a bicorne on instead of a shako (because he hasn't got one yet). The generous may see this as light hearted but he laughed whilst doing it only to take the edge of his criticism, he was picking holes, not only that but it was rude to do it in front of our own Officer. Only bemusement and not wanting to create bad blood kept us from having a go at him although I had some choice French expressions ready for if he came back again. 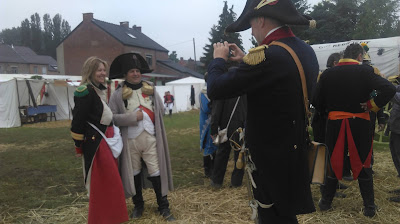 We DID come away feeling good about our drill and our presentation, the French, being French and schooled on le militaire Francaise probably take that side more seriously in the same way that the Grenadier guards, Windsor Davis in 'It aint 'arf hot mum.', the stiff upper lip, Zulu and the like inform British groups about Military standards as part of general culture... plus the Old Guard were there who are meant to be veterans of impecible standards and some of us saw then make a right pigs ear of a simple order and bump into each other, left and right. 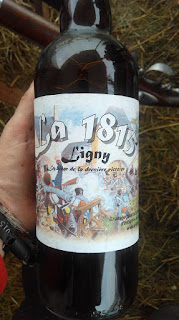 A good weekend, well organised yet relaxed. As at Waterloo just down the road I felt the locals were very much pro-French and I saw a few Tricolours hanging from local windows, I'm sure the locals were friendly to the Prussian guys too but with less cheering.
By mid-afternoon it was time to pack up the car to the brim and set off, seemingly with more stuff than we came with of course. 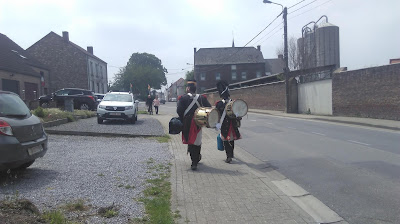 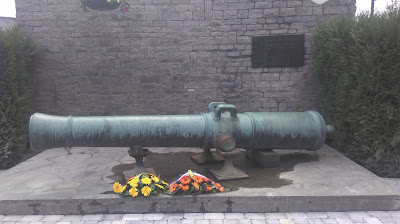 Posted by Rhandolph at 07:46 No comments: